The CE Department announced the final groupings of the third year CIV students based on the four fields of specialization being offerred at DLSU. These four fields are Hydraulics and Water Resources (HWR) under Dr. Danilo Terante, Transportation Engineering (TRE) under Dr. Alexis Fillone, Construction Technology & Mgt (CTM) under Engr. Ronaldo Gallardo and Structural Engineering (STE) under Dr. Andres Oreta. Starting this 3rd term SY 2008-2009, the third year students will be assigned their corresponding degree codes as CIV-HWR, CIV-TRE, CIV-CTM and CIV-STE. 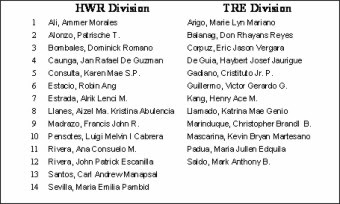 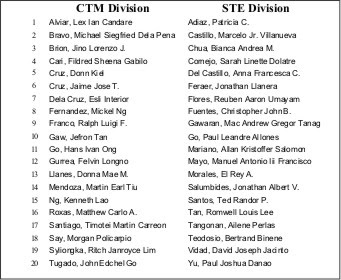 Prior to the final groupings, a CES specialization orientation was held on July 18, 2008 to promote the awareness of civil engineering students on the different specializations in civil engineering. Dr. Bernardo Lejano introduced the DLSU BSCE Specialization Program: Curriculum & Policies. On the other hand, the four fields of specialization were presented by CE faculty representatives - Renan Tanhueco (HWR), Dr. Fillone (TRE), Jason Ongpeng (CTM) and Dr, Oreta (STE).
Posted by AWCO at 12:03 AM