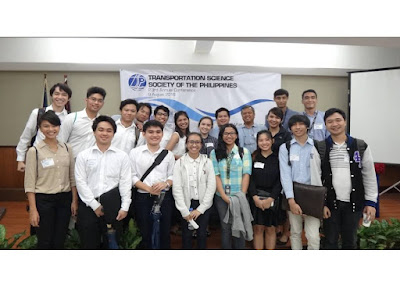 Students from the CE Department, majoring in transportation and planning, presented research papers at the Transportation Science Society of the Philippines(TSSP) national conference held at the National Center for Transportation Studies in UP, Diliman last August 8, 2016. The theme was “What Gets Measured, Gets Managed: Transportation, Data and Statistics.

The conference started with an opening remarks by Dr. Vea, the previous TSSP president. This is then followed by Hon. Lontoc (Undersecretary of Department of Transportation), who gave the keynote speech. A panel discussion regarding Road Safety was then followed by four speakers coming from DPWH, DOT, UP Diliman and PGRSP.

In the afternoon, the conference was separated into 4 sessions: Transportation Mode and Safety, Transport Modelling and Simulation, Transport Planning and Behavior Modelling. A total of 22 presenters, coming from different schools such as Lyceum, UP Diliman and Los Banos, Mapua, and DLSU- Manila. There are a total of 10 Lasallian groups and individuals who presented.

Here are the list of student and faculty members who presented their papers.

At the same time, TSSP has elected its new president, none other than our very own TRE Division Head, Dr. Alexis M. Fillone. Congratulations!