Thailand, a country that radiates a golden hue from its glittering temples and the beaming smiles of its people, became the venue for us four senior undergraduates from DLSU, John Benedict Abello, Sancho Dy, Angelo George Novales and Adimire Mariano, to have our adventure/education trip/ food trip/cultural immersion. Accompanied by our professor Miss Irene Olivia Ubay-Anongphouth, we were welcomed at Chulalongkorn University (CU) as part of the annual program organized by these two prestigious universities. We were set to spend ten days, from April 29-May 7, 2014, to learn and experience as much as we can. 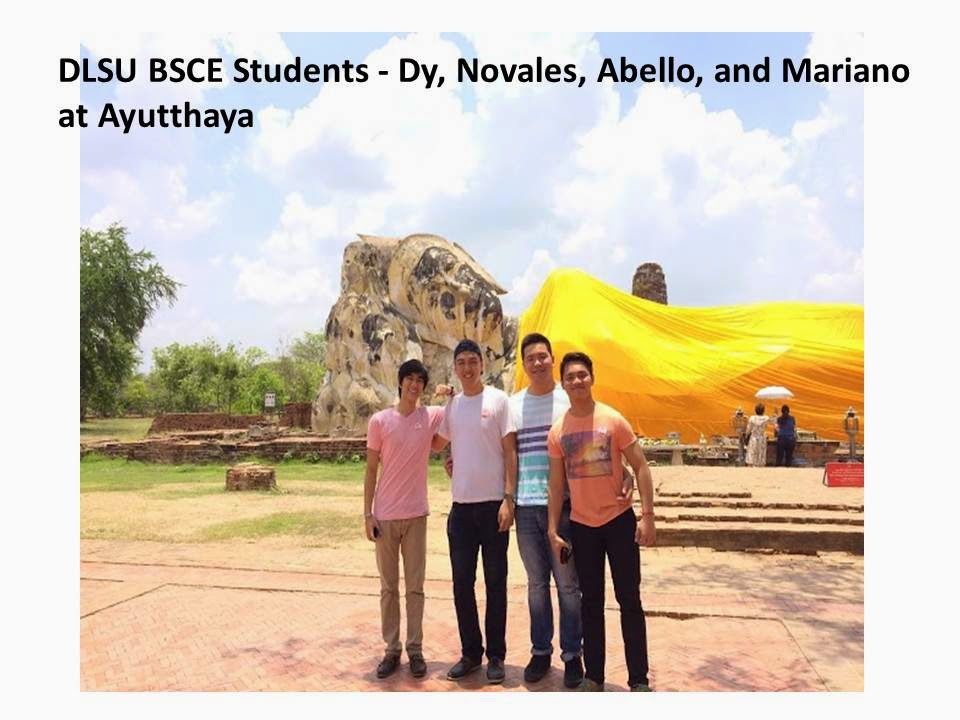 Stepping foot on Suvarnabhumi Airport, I was in awe by its beauty which was made even more obvious due to the fact that I departed from our airport a few hours before. The difference was stark unlike the familiar features of Thai faces that we passed by as we spent the first day of the trip to explore Bangkok and its glorious malls (it seems that Thai people love their malls as much as we do). We were also given a chance to see the various infrastructures found all over Bangkok and once again I cannot help but compare what we have back at home. They also have MRT but the name is the only similarity that the one in Metro Manila share.

Putting aside the rants, the next three days were spent in the company of various CU professors such as: Assoc. Prof. Dr Sorawit Narupiti, Dr. Veerasak Likhitruangsilp,  Dr. Suched Likitlersuang, Dr. Boonchai Sangpetngam and Dr. Akhrawat Lenwari. The CU faculty showed their presentations and several topics were presented such as the history of CU and the several scholarships that were being offered in the university. The presentation also covered the different specializations of the Master’s degree such as the Structural Engineerin, Construction Engineering and Management, Geotechnical Engineering, and Transportation Engineering. This was of particular interest to me because one of my personal reasons for going to this trip is to have an overview of how my life would be like in CU if I did pursue my plans of taking graduate studies. I was not disappointed as we spent the whole day touring the various laboratories that can be found in this wide and beautiful campus.

We went around the Full Scale Lab, Material Testing Lab, Highway Materials lab, Geotechnical Lab, and BIM Laboratory. For the first part of the tour, Dr. Akhrawat was the guide and we went around the various labs in CU. Some of the memorable machines were their giant UTM’s that could test full-scale specimens hence the name of the lab. All throughout this part we were sweating like pigs and when we came to the CM lab we were all smiles due to the air-conditioning here. But aside from the break from perspiration, this lab was interesting because of their cool computers and their 3D screen that had the BIM program integrated into its system. It was like playing a game and the method of moving throughout the flashed 3D structure was by using an Xbox 360 controller. This left a lasting impression on me and confirmed my choice of the CM specialization. 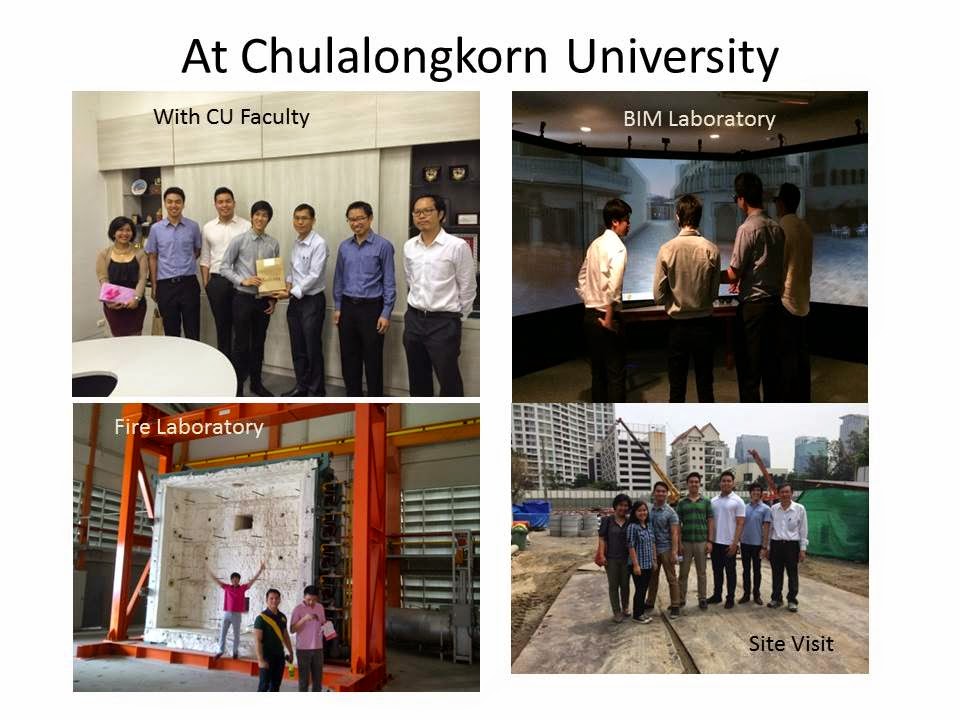 The rest of the tour was spent going around the campus which was filled with grassy fields and high trees that had cute squirrels inhabiting their branches. We also spent some time in the lake feeding the fish and pigeons some bread. As the sun was about to set, we found our way in front of MBK to watch the amateur Muay Thai Fight Night which takes place only on Wednesday nights. Personally, I enjoyed watching the fights as we spent around two hours around the ring experiencing a bloody part of the Thai culture.

The next day for the CU tour was allotted for the Saraburi trip where I was taken aback to the titanic features of this laboratory which is needed to conduct full-scale fire testing. The final day for the CU tour was divided into two parts. Accompanied by Dr. Wanchai, we first stopped at Langsuan Condominium where we saw the complications of building high rise buildings in densely populated areas. We then proceeded, together with Dr. Withit, to the huge pre-cast plant of Chusin Concrete Co. where we saw how pre-casting of both concrete and reinforcing steel are made.
All through-out our fun and educative Thailand experience, several DLSU alumni who were also studying in CU accompanied us as we spent the remaining days sightseeing. Jem Jayme, Erica Uy, and Daniel Velario were able to impart how their life has been as graduate students in CU and as Filipinos in this not-so-foreign land. I guess they are partly to blame for my increased interest in pursuing graduate studies in Thailand where I hope I can complete the puzzle as to what makes their country’s infrastructures so much better than ours. Would it be their culture, political system or national character? This I know, Filipinos will never lack the skill and intelligence to achieve or even be better at such things. Whether we admit it or not, we as civil engineers are at the forefront in building up our country and in the end this trip has showed me that my education is more than for myself.

Written by: John Benedict Abello
Posted by AWCO at 10:40 PM