DLSU CIV participants in Kanazawa, Japan for the 4th International Symposium on Concrete and Structures for Next Generation (CSN2019) 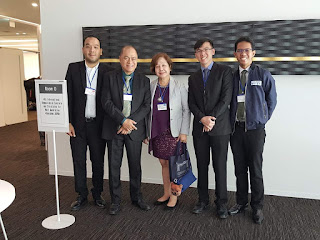 Last June 17 to 19, 2019, DLSU CIV professors and students attended the 4th International Symposium on Concrete and Structures for Next Generation (CSN2019) at the Hall at Kanazawa Chamber of Commerce and Industry in Kanazawa, Japan. Also with them are Professors and students from the DLSU Chemical Engineering Department and other delegates from distinguished Philippine Universities. Below is the list of participants:

The papers presented were the ff.:

The first International Symposium on Concrete and Structures for Next Generation dedicated to both Dr. Shoji Ikeda, Professor Emeritus of Yokohama National University and Dr. Nobuaki Otsuki, Professor Emeritus of Tokyo Institute of Technology, (thus, Ikeda-Otsuki Symposium or IOS2016) was held in Tokyo, Japan in May 2016. So far, the second one was held in Manila, Philippines in 2017 and the third one was held in Bangkok, Thailand in 2018. The consecutive one is now returning to Japan and will be held in Ishikawa Prefecture where a prestressed concrete bridge was constructed first in Japan.

The purpose of this fourth symposium is to contribute to the development of young or prominent engineers and researchers relating to concrete engineering in this global age on this occasion. In addition, Kanazawa is very traditional city and domestic and international tourists are increasing very much to see very famous Japanese garden named “Kenrokuen”. Furthermore, the new Shinkansen bullet train was opened in 2016 from Tokyo to Kanazawa within two and half hours ride. Komatsu International Airport is the nearest airport to Kanazawa, so the traffic access is excellent from any cities and countries.