Last March 22-23, 2018, the first World Water Day (WWD), with the theme “Answer is in Nature; Nature for Water”,  was held in De La Salle University-Manila.  It was organized by the Civil Engineering Department - Hydraulics and Water Resources Engineering Division and the Civil Engineering Society.  World Water Day is sponsored by Healthy Family Purified Water which is an advocacy by Manila Water Total Solutions.  By celebrating World Water Day, the organizers promoted sustainability and awareness regarding the emerging technologies in water resources engineering and how nature is the solution to water-related problems. 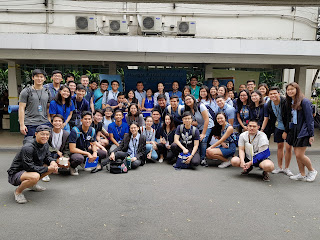 On the first day of the celebration of the World Water Day, a ribbon cutting ceremony was held in Velasco Bench 3 to officially open the booth.  The Gokongwei College of Engineering Dean, Dr. Jonathan Rivera Dungca, the Vice Chairperson of Civil Engineering Department, Dr. Mario De Leon, alongside Dr. Marla Maniquiz-Redillas, Engr. Richard De Jesus, Engr. Joenel Galupino, Engr. Maria Emilia Sevilla, Engr. Paolo Ian Lucero, and Engr. Miller Cutora were present during the opening ceremony of the booth.
The booth design itself revolved around the theme, where numerous civil engineering students, and professors were wearing blue and were seen participating in the booth activities. After the ribbon cutting, videos about water resources from UNICEF and civil engineering students who took CIVWARE in the previous term were shown to the audience. Free bottled water were also distributed to students who decided posted photos or selfies online using WWD’s official hashtags,
On the second day of the celebration of World Water Day, a seminar was held in the Don Enrique T. Yuchengco Hall of DLSU-Manila. Civil Engineering students especially students taking up water-related subjects and students specializing in Hydraulics and Water Resources Engineering actively participated in the discussion during the seminar.  The invited speakers, Engr. Trevor Morrish-Hale from Royal HaskoningDHV, Engr. Anya Arguelles from CH2M, and Dr. Renan Tanhueco from the CE Department, each talked about their research and experiences in the water industry field and were able to enhance the knowledge of the students.
Engr. Morrish-Hale, the first speaker discussed about the wonders and technologies of land reclamation. He started the talk by asking the audience about what they know about the sea level rise, and continued on to explain how reclamation is being done, as well as the problems that can be encountered when conducting it. Dr. Tanhueco, on the other hand, shared his case study, in partnership with other researchers who were also faculty members in DLSU, perceptions towards the use of eco-toilets in rural or low communities. The benefits of using eco-toilets, such as water conservation, nutrient supplementation for plants, and refined sanitation, were emphasized during his talk. The third and last speaker, Engr. Arguelles talked about the treatment of wastes, specifically industrial wastes.
It was also evident that the speakers left a significant impact to each student inside the hall because students became engaged in the discussion and asked several questions related to the presentations.
The first World Water Day at DLSU proved to be a successful one because not only the CE Students were able to take home additional knowledge but also the students that were enticed into the booth.  In the following years, World Water Day will become a widely celebrated event by everyone.

“The Answer is in Nature”

by  Rachelle Nicole A. Lao & Mariamae Francia Montejo
Posted by AWCO at 7:56 PM