TRE-CIV and ECE Faculty and Students at EASTS 2015 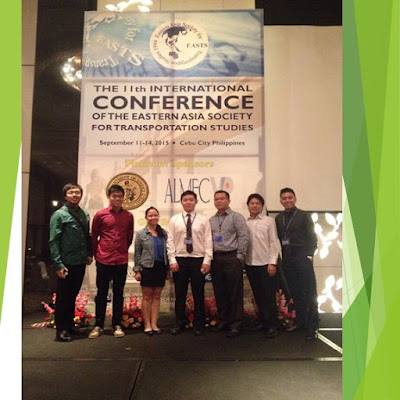 The following faculty and students from the Electronics and Communcation Engineering Department presented and their topics are as follows (ECE):
1. Engr. Dadula, Cristina (Co-author: Dr. Dadios) – Event Detection Using Adaptive Neuro Fuzzy Inference for a Public Transport Vehicle
2. Engr. Delos Angeles, Joel – Fuzzy Logic Based Multi-hop for Vehicular Ad-Hoc Networks
3. Engr. Intal, Ramon (Co-authors: Dr. Dadios, Dr. Fillone) – Optimized Bus Schedules in Epifanio Delos Santos Avenue (EDSA), Metro Manila Using Fuzzy Rule Based System
4. Engr. Yasay, Bernard (Co-authors: Dr. Dadios,  Dr. Fillone) – Adaptive Driving Route of Buses Along Epifanio Delos Santos Avenue (EDSA), Metor Manila using Fuzzy Logic
EASTS is an organization that was formed last 1994. This year’s conference is the 11th conference since the founding year. It is a bi-annual conference, which gathers Civil Engineers specializing in Transportation Engineering and other related professions around Asia and other parts of the world. It is a gathering of people who shares their research, findings and studies. It is where different Asian engineers, planners interact with each other. Studies focusing on the Planning, Analyzing, Studying the behavior and etc. were the other sub topics in the conference. The next conference will be held in 2017 in Vietnam.
Posted by AWCO at 2:39 AM