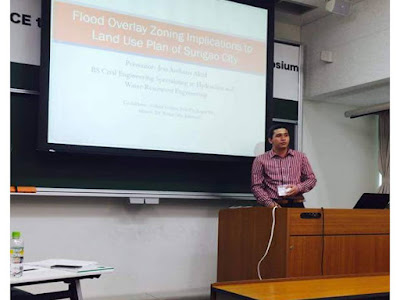 The Japan Society of Civil Engineers – Study Tour Grant (JSCE-STG) is a grant travel program supported by the International Science Exchange Fund (ISEF). This program which was held on the 3rd week of September (13-19), 2015 invites civil engineering students to Japan for one week with all expenses are covered by ISEF. The students are selected by their participating country’s civil engineering society and consequently screened by the JSCE. Each country had one representative each and the countries that were chosen to participate were China, Indonesia, Vietnam, Myanmar and Philippines. The participants were to learn latest technologies through lectures provided, visit large-scale construction sites and have discussions with Japanese civil engineering experts.

Only five participants were selected including Jess Anthony Alcid (BSCIV-HWR) of De La Salle University who is the only undergraduate student and represents the Philippines. Mr. Alcid is now undergoing his OJT program. The other recipients of the study tour grant who are all prefessionals came from China, Indonesia, Vietnam and Myanmar.

Aside from the construction site visits, they also attended the 17th International Summer Symposium held at Okayama University wherein International students and Japanese students have an opportunity to discuss their research projects and to have discussions with their peers. Over 100 papers are presented annually. The STG participants, presented their research papers as well. Mr. Alcid presented his group’s undergraduate thesis entitled “Flood Overlay Zoning Implications to Land use Plan of Surigao City” (co-researchers Mr. Arroyo, Mr. Co, Mr. Tiu and adviser, Dr. Tanhueco). After the presentations in the morning he also joined the International Workshop for Young Civil Engineers in the afternoon which was themed “Why Did You Come to Japan”. The workshop addressed the problems encountered by international civil engineering students (MS and PhD) while studying in Japan. The symposium also had a gathering to end the day at the Okayama Castle.

Alcid says "Overall, the trip was a very good opportunity to be exposed to large-scale projects and innovative methods and technologies of Japan civil engineering. The trip featured not only the technical advancements but also the dedication of the Japanese people, particularly those in the construction industry. They take pride in being exact when it comes to the schedule and their quality of work down to the last man. These things together with the technological advancements of that country should be set as a standard here, in our country as well. "