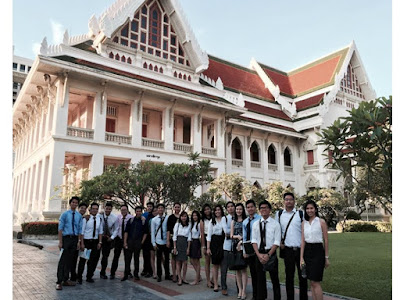 Twenty (20) undergraduate civil engineering students from the Gokongwei College of Engineering of De La Salle University (DLSU) went on an academic and cultural trip in Bangkok, Thailand last May 9-18, 2015 as part of the annual DLSU-Chulalongkorn University (CU) Undergraduate Cultural Exchange and Technical Visit which started in 2010. 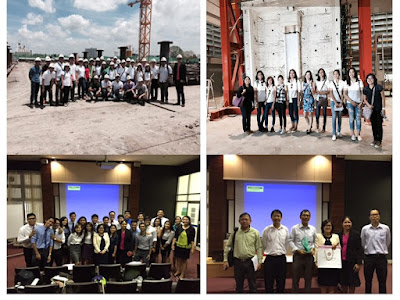 
8. The Characterization of Land Use Intensity and its Effect to Vehicular Flow Within Epifanio Delos Santos Avenue (Alvin Christian Monfero)


9. Factors Influencing the Use of Footbridges Along EDSA (Rei Robin Roland Tumambing)


10. An Analytic Investigation on the Relationship of Parameters from Non-linear Ultrasonic Testing Versus Load Applied on Concrete (Jeremiah San Pedro, Ron Oliver Lonzaga)

CU Fire Testing Research Center and Laboratory. On their second day, the participants went to the Fire Testing Research Center and Laboratory of the Department of Civil Engineering of CU in the nearby Saraburi Province to witness a live fire protection testing of steel beams applied with fire protection coating (intumescent paint) which was based on the research of Dr. Thanyawat Pothisiri, who also entertained the group throughout the procedure of the testing. According to Dr. Pothisiri, the current trend of fire protection system of steel structures in Thailand is the application of intumescent paint. However, there has been no conclusive fire-resistant ratings of different intumescent products in their country, so his research provides insight on the fire-resistant ratings of different intumescent paint products based on the data collected from the testing conducted by the Fire Safety Research Center of CU, the procedure of which was demonstrated to the participants. They were indeed fortunate that they get to see and witness how the state of the art fire testing equipment operates in the CE Department’s massive laboratory.

Construction Site Visits. Another vital objective of the trip was to expose the students to the infrastructure and construction industry of Thailand through the site visits of ongoing projects. The first site visit that the students did was a tunnel boring site for the Hua Lamphong-Bang Khae and Bang Sue-Tha Phra Sections of the MRT Blue Line Extension, which extends 14 kilometers long and about 5 kilometers of which is underground dual single track tunnels. The contractors of the said projects are the Italian-Thai Development Public Company Ltd. and the CH-Karnchang Public Company Ltd., respectively. The engineers on-site were very accommodating to the visitors and even provided a short lecture on the basics of railway engineering and tunnel boring. One interesting part of the lecture was about the purpose of the intervention shaft, which is vertical passageway essential to the construction of a tunnel railways. An intervention shaft is installed at the construction of every station, or in between stations, to serve as a passage for the equipment and the workers to operate construction underground. It also controls smoke in case of fire in the tunnel and the maintenance of air quality and temperature underground.

The next site that the participants visited was the construction of the New Thai Parliament House, which has a land area of 48.6 acres and consists of one main building of eleven storeys and thirteen supporting buildings. Before the site visit, the participants listened to a lecture given by Dr. Wanchai Teparaksa, an Associate Professor in CU CE Department, about the design of Contiguous Pile Wall for Basement Construction of the New Parliament House Project. It is a first for most of the student participants to see an actual construction of a contiguous pile wall as the foundation of a building. As piles closed to 0.1 m with each other, it provides a more efficient foundation for the structure, since the proximity of the site to the Chao Phraya River and its large size makes it vulnerable to all kinds of structural failure. Struts are installed to prop the retaining walls that holds the bored piles to its places, acting as a compression member. The depth of the bored piles are 20 ft. below ground level, which allows two basement floors of the main building. The main contractor of the project is Sino-Thai Engineering and Construction Public Company Ltd. who also permitted the participants to observe the construction of the colossal structure.

To complete the whole cultural exchange visit, the participants were accompanied by CU students, who were mostly Thai nationals, throughout the site visits and laboratory tour. Though they were very few, since it was their final examinations season during that time, somehow, the interaction was able to establish friendship between the DLSU and CU students. Also, on the free days, the participants explored the historical tourist spots in Bangkok. Among the places that the participants went to are the Ancient City, Wat Arun Temple, Wat Pho Temple, Wat Chaiwatthanaram in Ayutthaya Historical Park and the Safari World. The temples were stunning and it showed how a great deal of culture of Thailand, as well as the people then who have creatively hand-crafted the intricate designs while maintaining structural integrity up to the present. The students learned to pay respect to their culture and religion of the Thai people by observing the rules inside the temples. They have very well realized beauty and harmony in diversity through the visit to the historical sites. 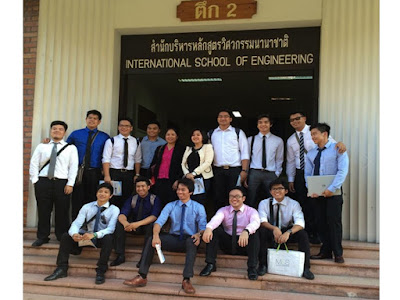 Overall, the participants had a very productive and meaningful trip in Bangkok, Thailand. With the guidance and supervision of their professors, CU MS graduates Engr. Cheryl Lyne Roxas and Engr. Erica Elice Uy, they were able to maximize their stay in a foreign country, opening their eyes and experiencing first-hand the field of civil engineering, both in research and the construction industry in Thailand, as well as its exquisite, rich culture.

There are four DLSU alumni who are currently pursuing their respective master’s degree at CU, namely: Mervyn Jan Malvar, Marcus Kyle Baron, Janine Faustino, and  Paolo Ian Lucero.The future looks bright for the participants who are mostly interested applicants to the CU graduate program since CU is considered one of the best universities in Thailand and the Southeast Asia.
Article by: Rachelle Rabino
Photos from: Engr. Cheryl Lyne Roxas, Krisia Martinez and Stacey Villa
Posted by AWCO at 6:17 AM