CE senior students - Matthew Roxas, John Fuentes and Tantan Feraer - competed in the PICE-Lungsod ng Maynila Chapter Invitational Golf Olympic last Aug. 23, 2009 at the Intramuros Golf Club. Matthew Roxas received the most number of awards : two special awards (The Longest Drive and The Most Accurate Drive) and a Champion Trophy for Class B. John Fuentes was runner-up in Class C. There were 36 participants in the tournament composed of engineers from DPWH, City Hall and various consulting firms. 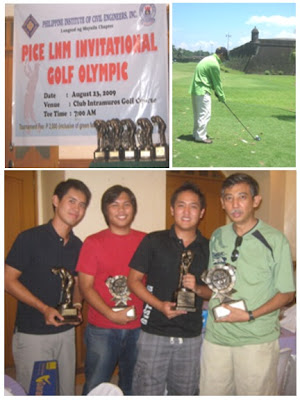