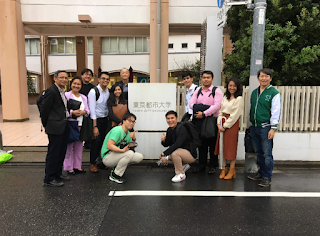 Last October 6 to 15, 2019, five De La Salle University (DLSU) students attended the Sakura Science Exchange Program. The Sakura Science Exchange Program is a 10 day exchange program for students aimed to fortify the partnership of japanese universities with foreign universities as well as building the relationships of students of the different universities through the sharing of knowledge and exchange of cultures. On DLSU’s 3rd year in the program, four BS/MS students and one MS student were chosen to participate in the program. These students are Mr. John Mark David, Mr. Angelo Edora, Ms. Francia Montejo, Mr. Izzhar Sumagaysay and Mr. Jon Arnel Telan. These students, along with Dr. Lessandro Estelito Garciano, visited Tokyo City University and partook in a mini-research during the period of their stay in Japan.

Since he will be focusing on coastal engineering, Telan was assigned to the water environment engineering laboratory under the supervision of Mikami-sensei, who is an expert in oceanography, geology, and civil engineering. He was tasked to do a research on the impact of natural hazards in coastal areas and the vulnerability of coastal communities in the future, and was able to come up with  a disaster risk mitigation highlighting the resilience of coastal structures such as ports and harbors against tsunami and earthquake. He also highlighted the 4R’s of Resilience specifically, Robustness, Rapidity, Redundancy and Resourcefulness.

Two of the students, Edora and Sumagaysay, were assigned to the geotechnical laboratory headed by Suemasa-sensi and Itoh-sensei. In this laboratory, the students were introduced to new testing methods such as the use of transparent soil and the tilting table test. Using the tilting table test, Edora determined the failure plane of an embankment composed of ao clay and silty sand #7 via Particle Image Velocimetry as the apparatus was recorded by a GoPro. 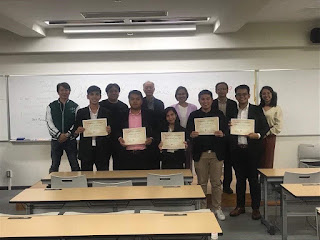 Montejo, who is planning on researching about the effect of soil conditions with earthquake motions, was assigned to the  structural reliability laboratory under Maruyama-sensei. Here, she was able to have a preliminary presentation showing the methodology of her research and its theoretical background. In the duration of the program, she was able to calculate shear wave velocities and provide the methodology in quantifying the site amplification. Additionally, Maruyama-sensei also discussed interesting topics such as computation for the optimal flow of network analysis and Kernel regression.

David, who is currently studying about concrete, was assigned to the concrete laboratory under Kurihara-sensei, whose research interest is primarily on construction materials. During the program, David performed a short experiment on recycling aggregates in concrete wastes through acid dissolution, with the help of two other TCU students. The recycled aggregates were submerged in an acid solution and after four days, a mortar sample verified the effectivity of the method. Currently, this method of recycling is being studied by Kurihara-sensei to replace the traditional crushing method.

However, the stay was not only focused on doing research. There were also several activities to feel Japan, its society and its culture. Several tourist spots were visited such as the Shibuya Crossing, Takeshita Street in Shinjuku, Akihabara, Odaiba. The Tokyo Skytree was also visited and the students viewed the Tokyo skyline from the observation deck of the Tokyo Metropolitan Government Building. Lastly, the students shared a celebratory dinner with Homma-sensei  along with Dr. Garciano and visiting professor Dr. Tibon. 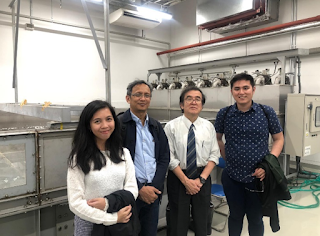