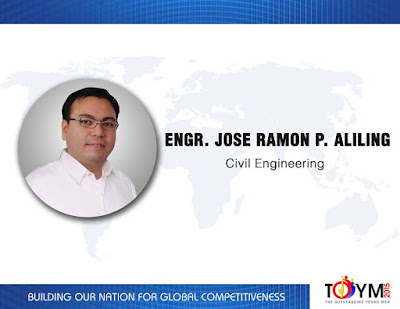 The Outstanding Young Men (TOYM) Foundation recently named Engr. Jose Ramon “Ping” Aliling as one of the 2015 TOYM Awardees under the category of Civil Engineering.  Engr. Aliling graduated from the DLSU College of Engineering with a Degree on Civil Engineering Major in Hydraulics and Water Resources (HWR) in 2002.

Ping also pioneered the creation and use of a Construction Management Manual and Customized Software that today sets the standard for management of world-class projects. The system includes live video streaming to promote transparency between the project owner, contractors, and suppliers, and online real-time monitoring of all documents, which makes internal auditing faster and more accurate. Ping has taken great strides to ensure that in all construction projects, corrupt practices previously considered as the norm for the industry is not tolerated or propagated. All his projects are stamped with the Jose Aliling brand of excellence, integrity, and client satisfaction.

Ping highly values the capabilities of all Filipinos and understands that empowerment is key to a sustainable industry. In the construction industry, he is the only one who prioritized and gave equal opportunities to engineering graduates and hopefuls from the provinces through the Probinsyanong Inhinyero program, as well as provided opportunities for women in an industry where women has often been inadequately represented.Ping considers the humble, honest, industrious, highly-capable, and young engineers schooled in the provinces – the Probinsiyanong Inhinyeros – to be his company’s real strength, comprising at least 80 percent of the company’s organic manpower and managing world-class projects. He also takes pride in the fact that almost 40% of the engineers who
work at JACMI are female, demonstrating their outstanding abilities alongside their male counterparts.

Another reason why Ping was awarded the TOYM because he has used his talent, resources, influence, and expertise to promote and support charitable, religious, and various humanitarian endeavors. His special civic projects support underprivileged youth, teachers, hospitals, and churches. He supports the Center for Migrant Youth, where the abused and abandoned are nurtured back to the mainstream society though values formation and education and also provided basic necessities for children with special needs at the Paaralan ng Pag-ibig at Pag-asa in San Pablo Laguna. He organized the PICPA Eastern Metro Manila–Jose Aliling Construction Management Group Child Nutrition Program and Medical Mission to supplement the health needs of children from indigent families who live precariously under the bridge in Barangay Maybunga, Pasig. He also personally managed the construction and church renovation of Our Lady of Pentecost Parish Church, the Parish of the Our Lady of Mary Immaculate Conception, the Mt. Carmel Church in New Manila, and the St. Michael the Archangel Church, all pro-bono.

Engr. Ping Aliling is a proof of DLSU excellence in the field of Engineering. And we look forward to have more La Sallians be recognized with such honor for their respective fields.

A month later we see another congratulatory message this time from ADMU. They totally eliminated the fact that he got his Civil Engineering degree from DLSU :P