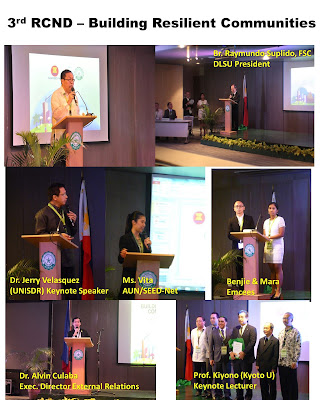 A welcome dinner was also organized by the DLSU Department of Civil Engineering in cooperation with DLSU External Relations and Internationalization Office. It was held at 5th floor Henry Sy, Sr. Hall, DLSU Manila, Philippines. The delegates were welcomed by Dr. Alvin Culaba (Director, External Relations and Internationalization Office) and Engr. Jason Engr. Jason Ongpeng (Chairman, Civil Engineering Department). The organizers invited DLSU Innersoul and DLSU Dance Company-Folk to entertain the delegates and introduce them to the Filipino culture. The dance company danced the Tinikling which is a traditional Philippine Dance that originated during the Spanish Colonial Era.


On the second day, the conference started with the parallel sessions that focused on understanding the hazards, reducing the disaster risks, planning for the risks and increasing people's resilience. After that, a plenary session occurred were a recap of the conference was presented by Dr. Renan T. Tanhueco (Conference Chairman) and closing remarks was given by Dr. Raymond Girard R. Tan (Director, Office of the Vice Chancellor for Research and Innovation). 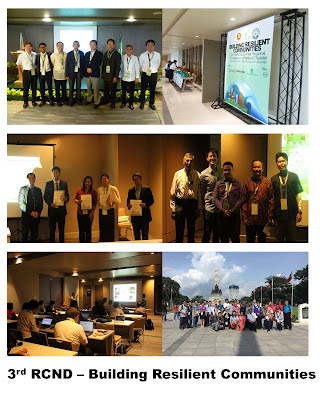 Sixty two (62) international papers were published in the proceedings while 55 delegates presented their paper during the conference. Twenty from the Philippines, eight from Japan, three from Thailand, twelve from Indonesia, three from Malaysia, four from Myanmar  and five from Vietnam, who had shared their researches regarding the said theme during the Parallel and Plenary Sessions that were held for two days.


After the Conference, the delegates went on a Manila City tour. They visited Rizal Park, National Museum, Fort Santiago and Silahis Arts and Crafts.

The support of AUN/SEED-Net, DLSU Administration, CES and CE Department faculty and staff is deeply appreciated. The funding provided by JICA is acknowledge. Thank you to all paper presentors and delegates. See you in the next RCND.