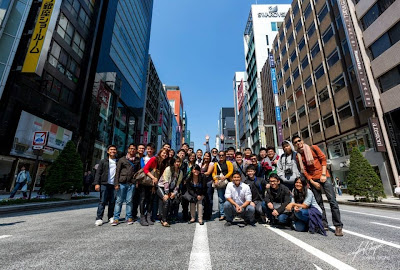 I had a lot of expectations on our socio-cultural exchange program in that was sponsored by the Tokyo Institute of Technology.  I have heard a lot of things from the country that is also known as the Land of the Rising Sun.  I knew I was in for an adventure with my friends, who were also first time visitors of the country. True enough, those expectations about the program were met with a sense of content and fulfillment that brought us a lot stories to share to our families.

The socio-cultural exchange program had a span of ten days in and was participated by civil engineering students and manufacturing engineering management students together with Engr. Ronaldo Gallardo, the chair of the Civil Engineering Department of DLSU, Ms. Ioulany Nayre and Ms. Buagas, both from the Institute of Technology, Philippine office in DLSU.  During those ten days, I had learned and experienced a lot of things more than normal tourist would see and do in the city.  I learned that they have a different culture from us Filipinos such as respectful gestures and the like.  Aside from the usual historical shrines and popular landmarks, we had visited different showrooms, markets and parks that made us want to come back and visit again.
The group visited the sponsoring school, Tokyo Institute of Technology during one of the school days.  It was an honor to witness the institution and its world class facilities in the campus.  The students from the university toured the group around the different laboratories that they use such as the mechanical technology laboratory where they showed different prototypes of their studies. Furthermore, they even showed us their supercomputers which they use in weather, earthquake and different kinds of simulation for study.  Towards the end of the day, the sponsoring school arranged a small welcoming party for the group to enjoy and get to know the students and faculty of TIT.  It was nice to communicate with the students since we get hear their stories about their life in the school and we get to know more about and its culture. The group also had two site visits during the trip.  First was in a company named Ebara Corporation.  Ebara manufactures different kinds of pumps and is one of the leading companies in supplying industrial pumps in .  They also take pride in their premier product, the centrifugal pumps.  They even demonstrated how these pumps are better than the usual pressure pumps in the supply of water.  The group had a tour around the facility which they showed how they manufacture different pumps. The second site visit was a research facility named Ports and Airports Research  Institute.  The Ports and Airports Research Institute, or PARI for short, studies and aids in the development of sea ports and airports.  The institution researches different water and land patterns for the efficiency of seaports and airports.  The group had a chance to tour around the facility which they showed their different modes of research.  The group even had a chance to witness an actual simulation of wave patterns which is used to study sea ports.
On the cultural side, we visited historical and tourist sites. One of the historical sites that the group had visited is the Meiji shrine.  The shrine, mainly a big area and garden, was said to have been frequently visited by the Emperor of Japan it was named after. The whole area had different structures and halls that were used during the olden times such as government meetings and discussions.  Nowadays, it is being used as a popular tourist site and wedding ceremonial place. We also visited the . It was amazing to see that the structure was made out of steel, knowing that the steel construction technology was beginning to gain popularity at the time of construction.  aren’t usually visited by foreigners.  The group had a chance to visit the Odaiba which housed a beautiful view deck of the bridge, Gundam statue and a replica of the French Statue of Liberty. To further add, there is a vintage car showroom and showroom in the area that were visited and enjoyed by the group. Thrilling and exciting do not describe the day we had spent in Fuji-Q.  The group had their chance in riding four different record breaking roller coasters during the visit in the theme park.  Aside from the rides, we witnessed a horror house that was scary and horrifying.  The day made us tired but we were happy to have enjoyed and experienced the theme park with each other.

One can really do a lot of  things in and I also wish there would be opportunities for us to visit the other cities as well.  Through our experiences and learning, I believe the students of DLSU   really enjoyed and learned a lot from their stay in what is known as the Land of the Rising Sun. We look forward in going back to the country to discover new things about the country.
Posted by AWCO at 5:40 PM