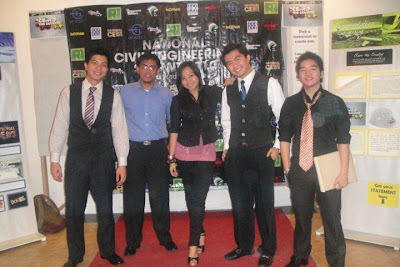 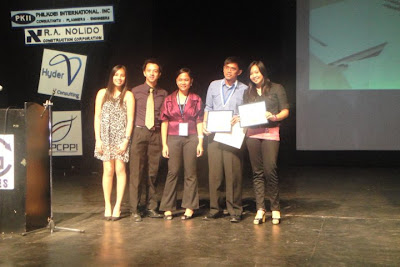 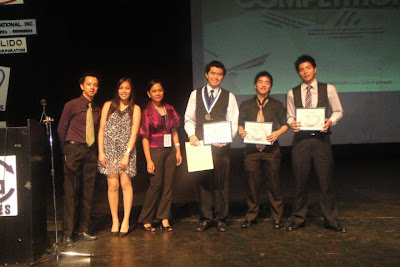 Two DLSU CE undergrad thesis groups won at the Civil Engineering Undergraduate Project Competition sponsored by the University of the Philippines Association of Civil Engineering Students (UPACES) during the National CE Summit 2010 held at UP Diliman. The 1st place award was given to the group of Patricia Adiaz and David Vidad with Dr. Bernardo Lejano as adviser for their thesis on "Effects of exterior post-tensioning on retrofitting deformed wide flange steel beams." The group of Morgan Say, Mickel Fernandez and Luigi Franco with Engr. Jason Ongpeng as adviser won 3rd place for their thesis on "Sustainable Development in the Construction Industry through ISO 14001 EMS (Environmental Management System)." The 2nd place was awarded to a group from UP Los Banos. About 20 groups participated in the competition.

The top 3 finalists presented to an audience of over 2000 guests, mostly civil engineering students and faculty members coming from various schools all over the country at the UP Theater, Diliman, QC on Sept. 3, 2010. The recognition is a mark of victory of De La Salle University’s Civil Engineering department’s continued excellence in the field of research and development. Congratulations!
Based on the write-up by Morgan Say
Photos by Margan Say
Posted by AWCO at 6:43 AM

thanks sir! :) we also thank all our DLSU professors for sharing us their time and knowledge in making our thesis a success :))