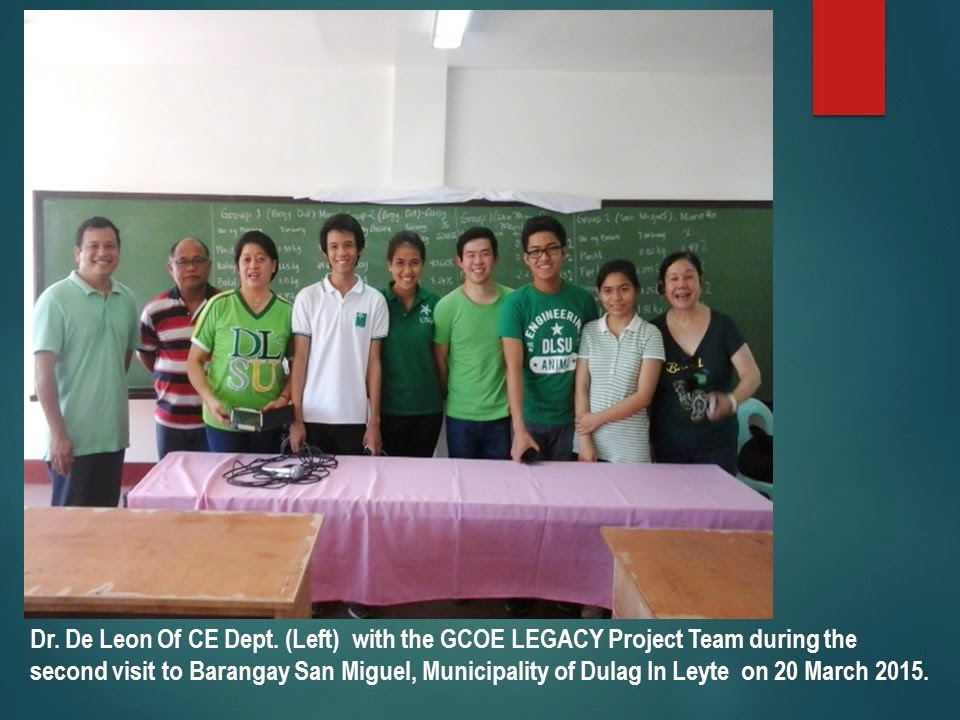 LEGACY (Lasallian Engineers for God and Country) Project is a community extension engagement of DLSU - USG ECG composed of engineering students and faculty advisers. One of the divisions of the GCOE LEGACY Project is the DRRM (Disaster Risk Reduction and Management) Team. This was created in response to the incident in Leyte in 2013 where the super typhoon Yolanda took thousands of lives and caused enormous damage to properties. The focus of the DRRM team is to provide basic assistance to priority communities in Leyte with the help and network of DLSP (De La Salle Philippines) in the form of information, education and campaign (IEC) on disaster risk reduction.


With the full support of the CE department chair, Engr. Jason Maximino Ongpeng, a team composed of Dr. Maricel Paringit, Dr.  Lessandro Estelito Garciano and Dr. Mario de Leon was tasked to look into the active participation of the department in disaster risk reduction of Barangays San Miguel and Diit.  A plan on how the DRR activity will be conducted was formulated. Dr. Paringit generated seven (7) maps consisting of Barangay Diit Administrative Map, Fault Line, Liquefaction Susceptibility, Storm Surge, MGB Flood Susceptibility, MGB Landslide Susceptibility, Waterways and Roads. The maps were made as basis of identifying four specific workshop activities that will be implemented at the two priority communities, to wit; (1) Location of Lifeline Support Structures/Facilities (2) Validation of Position/Location of Waterways and Roads, (3) Validation of Landslide and Flood Susceptibility Data (4) Structural Typologies of Houses and Soil Condition.

The DRR activities will be conducted at two sites: (a) Barangay San Miguel located in the Municipality of Dulag, and (b) Barangay Diit in Tacloban City, Leyte. Two visits were already conducted so far at the sites: (a) an ocular inspection to priority recipient communities – 14 Nov 2014 with Dr. Lessandro Garciano and Kirk Yu (CE Student) and (b) DRR and Workshop Activity - 20 Mar 2015 with Dr. Mario De Leon. 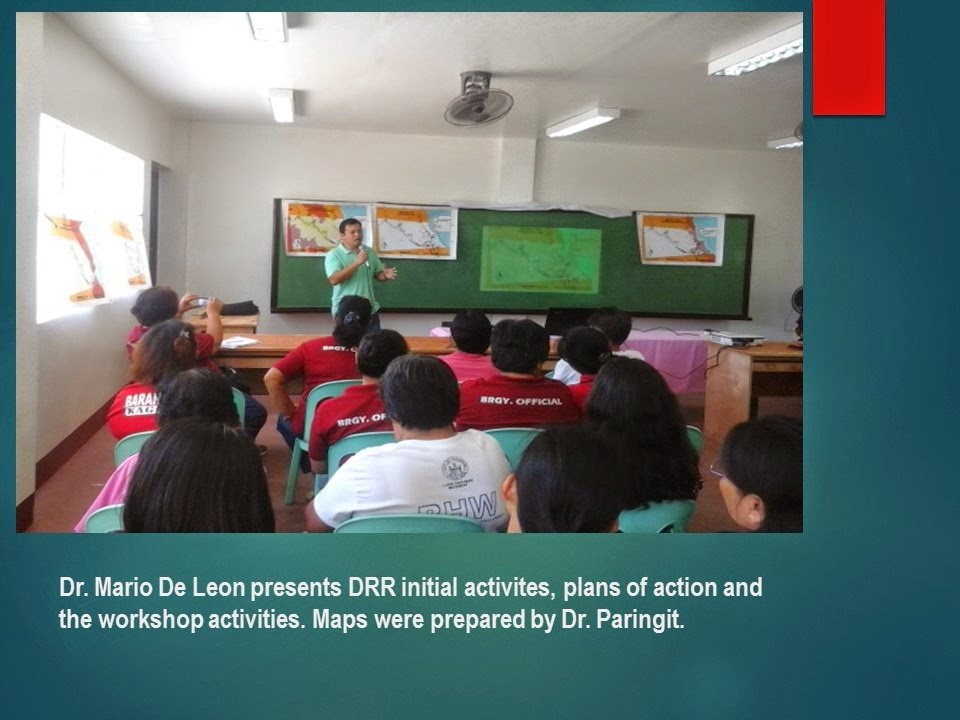 In the second visit, Dr. De Leon presented the initial findings of the first visit and the activities for the workshop. He gave an overview on the reading and interpreting the maps and the validation of data which are the plans of action that the two communities will have to perform in preparation for the design of their disaster management activities. Dr. De Leon with the GCOE LEGACY DRR Team Head, Mr. Louise Patrick Pambid facilitated the workshop at Barangay San Miguel. Three groups were formed to perform specific tasks, to wit; (1) Location of Lifeline Support Structures/Facilities, (2) Coastline Position Mapping, and (3) Structural Typologies of Houses in Barangay San Miguel. Orientation on the use GPS equipment was introduced to the survey group as well as the filling-out of data sheets. DLSU LEGACY faculty and engineering students assisted the groups’ field activity with the the barangay chairmen of San Miguel and Diit as leader of each group. The first group that conducted the field survey in Barangay San Miguel identified the location coordinates of lifeline support centers which are the barangay hall, school building, chapel and basketball court. These centers serve as evacuation sites of residents in the event of disasters. 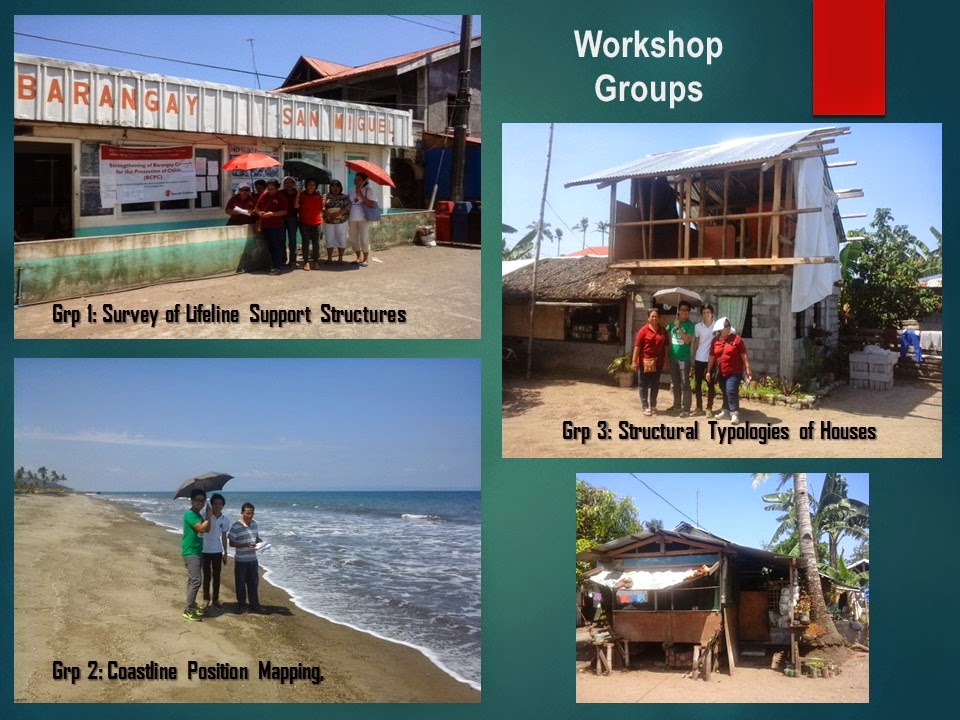 The task of the second group is to identify structural typologies of house buildings found in the coastal community. There are house structures that are one-story and two-story made of layers of hollow-blocks as wall, with concrete columns and wooden post, and some houses use light materials such as plywood, galvanized iron, nipa and cogon as walls, wooden truss frames and GI sheet as roofing material. The location coordinates of the house structures were also obtained. The structural make-up of the houses is an indicator of its strength to withstand damage due to occurrences of typhoon, earthquake and other disasters.

The third group was assigned to perform coastline position mapping with the aid of GPS. There were five (5) points in the beach area where the location coordinates were taken at approximately almost 0.3km in length from a 1km stretch of the coastline. Survey of coastline position determines the extent of its advancement or recession which may have potentials of reaching the areas where the houses are located. On the average, houses are built approximately more than 50 meters from the coastline.

The workshop ended with a short presentation of initial findings and results of the field survey. As a concrete manifestation of DLSU CE department’s commitment to community engagement of the priority communities in Leyte, the seven maps were donated to Barangay Diit and was received by their barangay chairmen, Ms Veronica De La Crus, with the intention to use them in their information and education dissemination in their respective barangay and to continue the work on validation of data. The presentation of the maps was witnessed by Dr. Leonila Abella and Dr. Susan Gallardo of DLSU.

Based on the report by Dr. Mario De Leon
Posted by AWCO at 6:30 PM