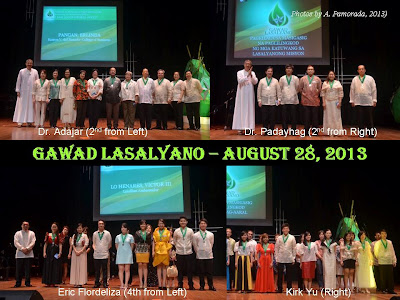 Last August 28, 2013, Gawad Lasalyano 2013 was held at the Teresa G. Yuchengco Auditorium. The event saw five members of the Civil Engineering department honoured for their service to the school.  Faculty members, Dr. Mary Ann Adajar and Dr. Grace Padayhag were given the ‘Masigasig na Paglilingkod ng mga Katuwang sa Lasalyanong Misyon,’ for their invaluable service to the University. Dr. Adajar served as part of the Lasallian Pastoral Office and Dr. Padayhag as member of the Office of Student LIFE, specifically as an adviser of the Civil Engineering Society. Br. Michael Broughton, Vice Chancellor for Lasallian Mission presented the awards.

Gawad Lasalyano is an annual night of recognizing members of the Lasallian community who has shown tireless dedication in service to the school through the advancement of the Lasallian Mission or bringing glory to the University’s name. The event aims to serve as an avenue to inspire fellow Lasallians to continue in the excellence of the University in the fields of leadership, service, sports, campus media, culture and arts, military service, discipline formation, community service and faith formation.
Reported by Kirk Yu
Photos by A. Pamorada
Posted by AWCO at 8:12 PM