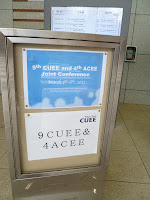 
Dr. Andres Oreta is a member of the international scientific committee (ISC) of the 9CUEE-4ACEE. He presented a paper on "Rapid Visual Screening and Two-Dimensional Seismic Vulnerability Classification of Important Buildings" which is co-authored with Oscar Cammayo, Jr.,  Katrina S. Baluyot, Art Jester C. Ramos and Maria Celina N. Suarez. The paper proposed a simple approach of prioritizing buildings for detailed seismic inspection using a dual criteria to classify important buildings such as school and hosptial buildings based on a rapid visual screening score and a second criterion such as importance of a building or existence non-structural hazards. As an ISC member, Oreta was also tasked to be one of the judges in the Young Researchers Awards.
Attending the conference also were members and directors of the Association of Stuctural Engineers of the Philippines (ASEP). ASEP is the founding organization of the ACEE and was thehost of the 1st and 2nd editions of the ACEE. The 5th ACEE may be held at Taipei with NCREE as the host in 2014.
Posted by AWCO at 8:05 PM