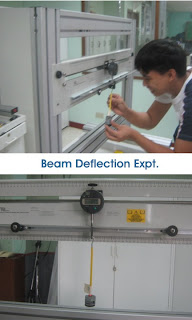 Third year BSCE students can now perform laboratory experiments in the new course on Theory of Structures Laboratory. The course was introduced when the curriculum was revised three years ago in compliance with a CHED directive.


The Structures Models Room at V513 houses the Modular Structures Teaching Equipment and computers with structural engineering software like GRASP, SAP2000 and ETABS. The Structures Teaching Equipment were developed by Tecquipment Structures. The department purchased the equipment for performing the folowing experiments:
(a) Bending Moments in a Beam
(b) Shear Force in a Beam
(c) Deflections of Beams and Cantilevers
(d) Pin-Jointed Frameworks
(e) Frame Deflections and Reactions
(f) Unsymmetrical Bending and Shear Center


The Theory of Structures Laboratory was offered this 2nd term SY 2010-2011 under Dr. Andres Oreta. The students perfom computational work at the Structural Engineering Instructional Laboratory at V512 and perform the experiments at the adjacent V513 room. So far, the students performed experiments on finding the relationships between Moment and Load, Shear Force and Load, Deflection and Load. Experiments on the effect of a moving load on moment and shear force and the use of influence lines were also performed. Deflections of beams due to various parameters such as length, material and support conditions were also performed. Analysis of a roof truss and a portal frame will also be conducted.


The laboratory course complements the lecture class on the Theory of Structures. By conducting the experiments, the students observed the behavior of simple structural elements and verify the theory. They also learn how to analyze experimental data and apply data analysis tools such a regresssion analysis and curve fitting. They prepare laboratory reports using computer-based tools like Microsoft Word, Excel and graphic software. They also improve their teamwork since the experiments are conducted in groups. Over-all, the course enhances the teaching and learning process in understanding concepts in structural analysis.
Posted by AWCO at 5:06 PM