Lasallians In Tokyo by Katrina Tengki

On September 6, 2009, instead of spending time lazing around, going out with friends or celebrating the end of the grueling finals week, 10 engineering students hauled off their luggage to the airport and went off to Japan for an exciting socio-cultural exchange program with the Tokyo Institute of Technology (TIT). There began 11 days of speaker box making, endless walking, window shopping, interactions with the Japanese and maybe also a few sleepless nights. 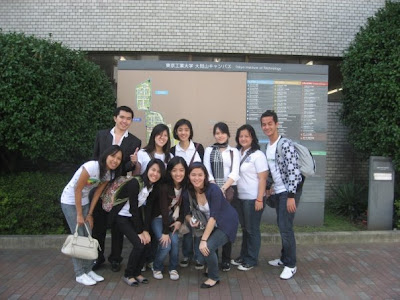 The moment we stepped off the plane and heard the attendants greeting us with a warm “Yokoso!” or “Welcome!,” our worries about our final exams were wiped away by our excitement for what was in store for us. We looked around at the sceneries around us, hoping to capture the imagery of every new thing we discover about this country we were in. It was like discovering a place where modernity meets tradition. Some houses had old fashioned roof tiles that had “old Japan” screamed all over them. It made one imagine the time when samurais and geishas were just around the corner. At the same time, one could not help but be momentarily displaced by the eerie silence of the place which was so different from Metro Manila. The trains were amazingly prompt and efficient. The washrooms also had buttons all around for any conceivable function that the Japanese might have thought of. Also, the people were very punctual and polite; they talked in soft, friendly voices. The weather at that time was quite pleasant and sunny. In fact, one could even do without a sweater when outside. It did get a little colder at night and the one time during our stay that it rained there.

On our first day at the Tokyo Institute of Technology, we were welcomed by the Japanese professors and students with a party. They shared their Japanese biscuits, drinks and snacks with us, while we brought dried mangoes, polvoron, and other gifts from the Philippines, which made the Japanese very happy. It was more like an exchange of snacks from both countries while socializing and getting to know each other. Mostly, we were able to communicate with the Japanese students. They could speak English well enough to converse with us a 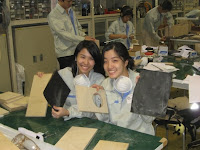 nd teach us some of their Japanese words as well. So far the most useful Japanese term I learned was “domo arigato gozaimasu” which means “thank you very much.” I found myself using this phrase everyday. 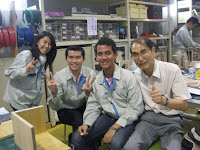 spent designing the speaker box and making friends with the Japanese students.

For the next few days, we followed a routine of going to TIT to work on the speakers from 10:00 am to 4:00 pm, and then walking around the streets of Tokyo at night. Our days were spent wood cutting, sanding, drawing, soldering, drilling etc. while our nights were spent walking, shopping and sightseeing. As a result we ended up coming home late and tired each night. 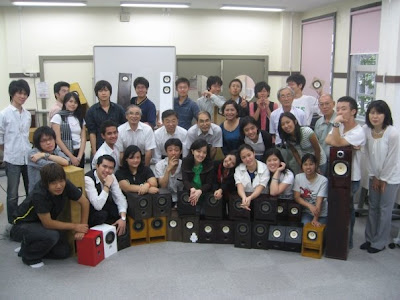 Getting around Tokyo is not that difficult once you are familiar with the railway systems. Tokyo’s rail service is safe, extensive, efficient and fast, not to mention cheaper than the other means of transportation available. For would-be tourists, I recommend the JR Yamanote line, which is a commuter line that runs around Tokyo, linking most of Tokyo’s major stations, tourist hubs and urban centers.

Some of the shopping areas we visited are Ginza, Shibuya, Harajuku and Akihabara. Ginza, is one of the most expensive streets in Tok 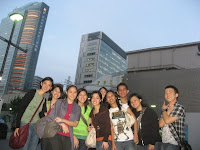 yo, it is also known as Tokyo’s very own Times Square. All over the district are boutiques, restaurants, clubs and department stores. With the Sony building, the stores of designer brands like Prada, Burberry and the famous Wako clock tower, Ginza is definitely a dream come true for the shopper at heart. Next is Shibuya, which is a district filled with fashion boutiques, where young people with loud and distinct fashion senses gather and meet. Especially with the eye-catching “Gothic Lolitas” or young ladies dressed in gothic clothes with a hint of baby-doll cuteness. Also part of Shibuya is Harajuku, another shopping place with a lot of cheap things for the young people. Somewhere near Harajuku is the Meiji Shrine, which is an old Japanese structure where Japanese weddings usually take place. Lastly, we visited Akihabara Electronic Town, a haven for “technophiles” and anime/video game lovers. There are several department stores in the area that offer everything, from appliances to gadgets to cute souvenirs at relatively lower prices. 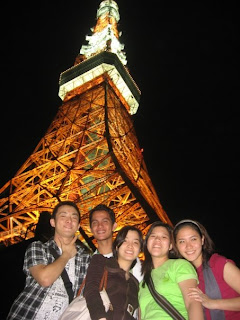 During some of our free time spent with the Japanese, we also rode the Tokyo sightseeing party cruise wherein we traveled from Asakusa to Odaiba Seaside Park and passed fourteen bridges on the way. We also visited Disneyland during one of their most-awaited Halloween celebrations. We arrived at Disneyland just in time to watch the parade of all the villains from each of our favorite Disney movies, although we could not understand what they were saying since most of the upbeat songs were in Japanese. The rides were absolutely awesome and entertaining.

Before our trip came to an end, the Japanese students gave us a nice farewell party wherein they shared some snacks and drinks with us at the university. A classroom was again turned into a party room. We took a lot of pictures and the Japanese gave us some souvenirs to remind us of our time in their University. Finally, we said all our goodbyes, did our last minute shopping, and put our minds to going back home to the Philippines and seeing our loved ones again. As the saying goes, “there’s no place like home,” the Philippines would always be home to us, but our memories of Japan would definitely have a special place in our hearts.